You are here: Home / Article / Rising From the Mud and the Ashes – Restoring Montecito

We hear about disasters around the globe on a daily basis, but it’s hard to imagine that such devastation will ever hit so close to home. In early December 2017, the Thomas Fire swept through Ventura and Santa Barbara counties to become the second largest fire in California history. On January 9, 2018, before the fire was even fully contained, the first measurable rain of the season fell, generating massive debris flows that devastated Montecito. In a matter of moments, 23 people lost their lives and over 400 homes, 33 commercial structures and 92 outbuildings were destroyed or damaged.

The debris flows left this site covered in three feet of mud and detritus. Below are images from before, during and after the disaster. The images on these pages were taken a mere eight months after the award-winning garden – which we had built in 2004 – was restored from the ground up. Before the destruction. This naturalistic garden, prior to the disaster, was home to a range of wildlife. Notable species included coyotes, bobcats, hawks, quail, dove, owls and mallards. Songbirds, bats, butterflies, native pollinators, reptiles and amphibians are plentiful too. Before the destruction. The pre-disaster garden was designated Certified Wildlife Habitat by the National Wildlife Federation.

Before the destruction. The modest residence, guest house (above) and garage flank the motor court. The structures – pre-disaster – were covered in vines and adorned with charming pieces of sculpture and comfortable, inviting furniture. January 2018. Several feet of thick mud cover the driveway. Mud entered the garage and guest house, destroying two cars and most of the surfaces and furnishings inside. The main residence, having been built two feet above base flood elevation, escaped inundation, both inside and – incredibly – in the crawl space below. January 2018. Mixed with the mud, debris from all over Montecito – massive beams and other lumber from decimated homes; broken ceramics, furniture, figurines and garbage – are strewn about the property. January 2018. The pond is filled with mud and debris. The mud was sifted meticulously and sorted into piles of soil, wood/green waste, boulders and garbage. Garden objects and building materials were salvaged for re-use. Most of the salvaged items were from on-site — but some came from as far away as Casa de Maria, over a quarter-mile upstream. 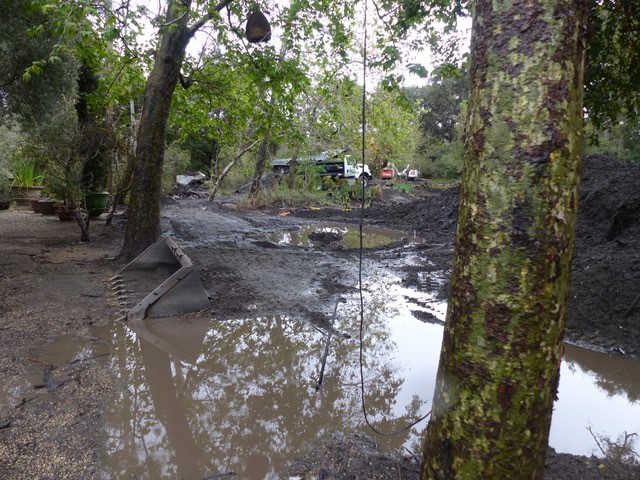 Rather than haul all of the mud offsite, we built three massive berms: two by the pond and one along the west property line – the only places on site where the soil could be placed without impacting surviving trees. May 2019 – Eight months after restoration. “Sycamore and Poppy Mountain”, a massive mound of mud, was put in place and compacted during the clean up, above and below. We shaped the mound and added boulders, steps and gravel paths. Newly planted Sycamores, poppies and other natives are growing at an astounding rate in the fertile soil. May 2019 – Eight months after restoration. The garden and grounds are nearly back to their former glory. Life has returned with a vengeance. So far this year, we’ve counted three batches of Mallard ducklings and two rounds of owlets in the new owl box. Quail are beginning to venture back as the plant shelter grows denser. Songbirds, hummers and butterflies are superabundant as well. As the wildland surrounding the property continues to recover, it’s just a matter of time before the larger mammals return and this beautiful place is once again a burgeoning wildlife sanctuary.

Our sincere thanks to our clients and the whole restoration team: Accurate Construction (clean up), Giffin and Crane (general contractors) and Dan Siebert (Estate Gardener) – both for his institutional knowledge during the garden restoration and for his ongoing care and stewardship.

A Look Back! Living The Dream In 1996
Next Post: Patina Evening

New branches! Last ones too “Brobdignagian”!!

Oh!!! We are so thrilled!! Back a few times a week

This post was originally written in May of 2011, but it has been revised just for you! I have often said that my ideas are really unfulfillable without my treasured “team”.  One of my favorite team members has and will always be my dear friend and talented artist Radisha. He has been creating sensational works …