Exciting news!  The new issue of Veranda March-April has the 2020 Outdoor Living awards.  The first time ever!  And our garden was selected to be one of the eight awardees!!!  The talented garden designer who originally designed our landscape came back after it was almost totally destroyed and restored it.  I haven’t posted a blog in a long time;  and I am going to post one showing the before and after with some description of the experience.  I know I showed things on Instagram, but want to describe the experience of a disaster and its aftermath and rebuilding.

Calling it A Wildly Beautiful Revival, the venerable magazine lauded the garden’s wildlife-friendly, naturalistic design.”I always look for a strong design plan, and each of the winning gardens had beautiful architecture to it,” says interior designer Bunny Williams, who, together with Institute of Classical Architecture & Art (ICAA) president Peter Lyden, judged the entries.

Lyden agrees, adding that for him, the projects that embraced and built on the natural characteristics of their environments rose to the top. “I really admire the way these gardens and outdoor living spaces did just that,” he says. 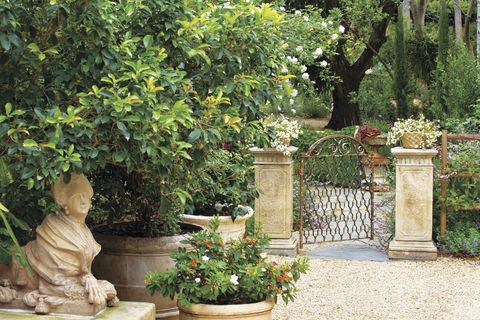 Before the catastrophic Montecito mudflows of 2018, everything that grew on this two-acre property in Southern California was “magic,” says landscape designer Margie Grace. Roses would bloom in the shade; hydrangeas relished the blazing sun. A grassy, serene pond drew ducks and quail and owls, all against an extraordinary backdrop of towering palms and live oaks belonging to a neighboring estate, like a regal army watching over it.

Once cloaked in mud, the Boston ivy on the main house and guesthouse (inset) was cleaned up, and “the roots just started sprouting again,” says landscape designer Margie Grace.

Then came the mud. “Everything was wiped out…plants, fences, animals. It was biblical,” recalls Grace. “We learned the absolute power of nature.” In the eight months that followed, another lesson emerged for Grace and the homeowner, designer Penelope Bianchi of McCormick Interiors: The magic hadn’t been swept away with the sludge. If anything, it had strengthened tenfold.

Behind the main house, a Coast live oak shades a rustic dining terrace.

As they washed two feet of mud from the guesthouse and garage and cleaned up whatever they could salvage, they faced mountains of leftover sediment. “We had to do something with it, and I thought, There’s no reason the land has to be dead flat,” says Grace. So she began working it into the restoration plan.

At the south side of the house, she repurposed a portion of the muddy sediment into a 28-foot hill planted with sycamores and poppies and another into soil for a 12-foot redbud knoll. Along the property line, a four-foot berm became an organic solution for a washed-away privacy fence.

“Everything I put in the ground grew lightning fast,” recalls Grace, who trained in biology and geology. “I thought the new soil would be full of toxins, but the levels didn’t even register. What was left behind was amazing dirt.”

The restored pond borders a 45-acre nature preserve and was critical to the return of wildlife like mallards.

And the wildlife returned in multiples. “In California, we have trees like sycamores and redwoods that grow in the stream beds. Winter will come and water will whoosh down, and the trees may get buried with three feet of dirt and still live. They grow character instead of giving up. This garden has always had good vibes, and that’s part of it. But you just get out of the way and let nature fix it. Nature doesn’t give up.”
Previous Post: «

New branches! Last ones too “Brobdignagian”!!

Oh!!! We are so thrilled!! Back a few times a week

There has been a problem with your Instagram Feed.

This post was originally written in May of 2011, but it has been revised just for you! I have often said that my ideas are really unfulfillable without my treasured “team”.  One of my favorite team members has and will always be my dear friend and talented artist Radisha. He has been creating sensational works …